I think it is interesting to know the story behind a school's mascot.

The Georgia Institute of Technology is located in the heart of Atlanta. I have been to Atlanta once, but have not been to the campus. So I don't have any first hand knowledge of GT. However,I will say that since moving to Georgia almost two years ago, that they do LOVE their insects here....I mean you HAVE to.....they are EVERYWHERE!
So without further delay I give you the story of the origin of GT's Yellow Jacket mascot.
(courtesy of Wikipedia)
The term Yellow Jacket or Yellowjacket has been used to refer to students and the various sports teams as early as the 1890's. Fans of Georgia Tech would often wear yellow jackets to sporting events in support of the early Georgia Tech teams. The early football teams, lacking gold fabric for jerseys, wore yellow jerseys. John Heisman told the Atlanta Constitution that he wanted his teams to be referred to as the Yellow Jackets in October 1905. In November 1906, The Atlanta Journal portrayed a University of Georgia football player being attacked by a yellowjacket with the words "Somebody's about to get stung" as the caption. This was the first time that the Georgia Tech sports teams were referred to as the Georgia Tech Yellow Jackets in print. 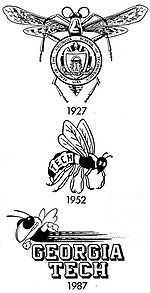 Isn't it fun to see the progression of the little bugger? 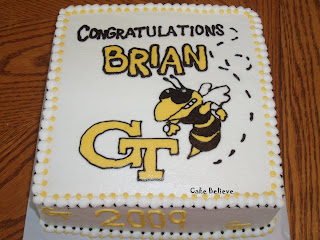 Congratulations on your International Affairs Degree Brian!
Posted by Cake Believe at 8:28 PM