I love superhero cake themes! It gives me a chance to revisit old comic book pictures and find the right one that works for the cake.
John Ryan is turning 5 and is an extreme Superman fan. His mom told me he is watching the old episodes from quite a way back. I found out that Superman was first printed in comic form in 1938. He's still quite a man for being over 70 years old!

First I made Superman cupcakes for John Ryan to share with his classmates at his school. 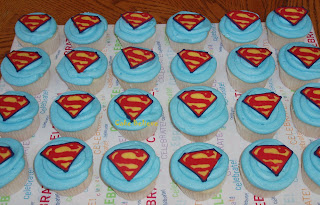 Then he was having a party at the locale jumping party place ~ Leapin' Lizards ~ so he needed a cake to share with all his guests!

I used the FBCT method to create the Superman on top of the cake.... 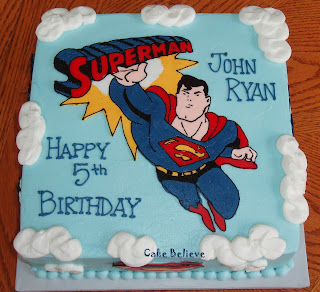 and the cityscape skyline and logos are made from chocolate. 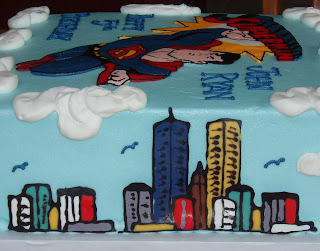 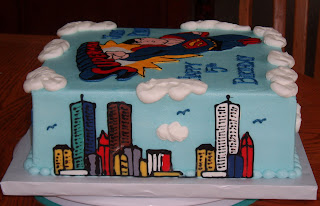 John Ryan was very excited when I brought the cake to his party. Everyone that was in the room was oooing and aaahing over it. One woman even said..."we can't cut that cake!". I just LOVE it when I get that kind of reaction! 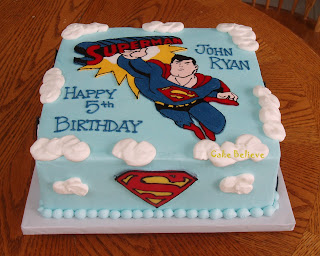 Here is the feedback I received from John Ryan's mom:

Thank you so much for the awesome Superman Birthday cake. You did a fabulous job. John Ryan thought it was the best cake in the world and wanted to know if he can have another one for his next birthday. It was the best tasting cake I have ever eaten. I am spreading the word and will use you for all of my cakes in the future. Also the fact that you delivered it to the party was so convenient and decreased my stress level for the day. Again, thank you for the cake and cupcakes. Hayley A.