No, I love YOU more!

What an amazing weekend I had! We traveled to the Smoky Mountains of Tennessee and stayed in a cabin for a few nights. It's the perfect time of year, the boys are off school for fall break, and the leaves are changing colors.....AND it is almost my little niece's 2nd birthday!
Put that all together and you get a car loaded with suitcases and cake decorating supplies heading north! See, I was blessed with the opportunity to make her first birthday cake.... 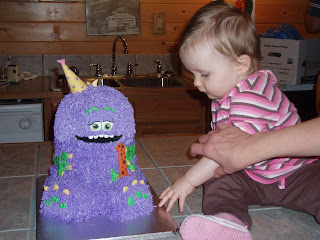 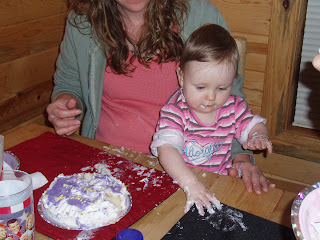 And when the timing worked out again this year....I jumped at the chance. Now you have to know that Leah's first word......was more than likely......SPONGEBOB. It's crazy but this little girl is enchanted by Spongebob....maybe it's the music, maybe the bright colors or maybe she is mature beyond her years (all 2 of them) that she just has to get a good laugh in every once in a while.
'Are you ready kids?'

'Ooooooooooooh, who lives in a pineapple under the sea?'

'Spongebob Squarepants!'
(I hope you're singing with me!)

So Spongebob it had to be! I had some great guidance from Cake Fixation (check out her tutorial on her blog) and some of my own ideas and this is what I created! 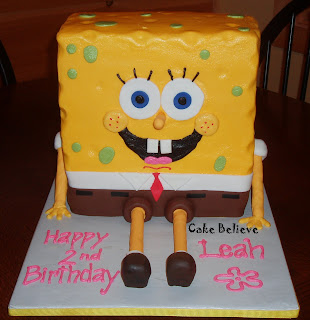 When Leah saw it she knew right away who it was...(thank goodness, whew~).
He was sitting on my cake turntable and she spun him around, she thought that was fun.
Of course when I HAD to get a picture of her sitting next to him (like last year) she wanted to spin him again.....only this time she ended up with fingers full of buttercream! She was surprised to say the least, and she was a little bit nervous. She wasn't expecting to touch something so squishy! We cleaned her up, said no problem, we'll fix him.....she still wasn't sure she wanted to sit next to him anymore. 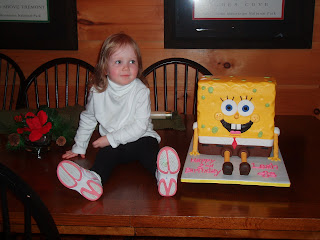 Then auntie let her taste spongebob's yellow coating and then she didn't mind sitting there (just a little bit nervous). When I was smoothing out the mishap Leah wanted to "taste spongebob" again so I let her swipe her tiny little finger across the spatula. She did this with ease and straight to her mouth.....one more little taste for good measure....sure!
Then I said "all done" and she looked at her other index finger as if it weren't fair and she needed to taste from that finger also! Too funny!
After dinner it was time to light the candles and sing Happy Birthday! 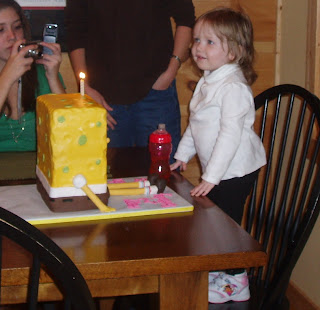 (I totally made her Mom break the rules and said she had to STAND on a chair to blow out the candles!)
Birthday girl always gets the first slice! 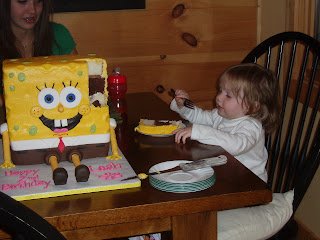 (This year she used a fork instead of fingers!)

I know it's crazy, I made a giant cake and there were only 7 of us. So my sister took Spongebob home and I'm hoping he survived the car ride into work today so she could share with her office. When the girls left the cabin yesterday, I kissed Leah and said "I love you!" and her response in her cute little Leah voice was "I love you mooore!" ~ I melted right there.
(In the interest of full disclosure, I believe she will say this to anyone who says "I love you".....but I know this time was really meant just for ME!)
I can hardly wait for next year!
Wonder what Leah will want then.......
Posted by Cake Believe at 7:08 PM