As promised, here is the Pokemon cake that I made for my son's birthday party at the local fun park. I have several views of the cake because I made several of his favorite Pokemon characters. I also made this a three layer cake because I knew the characters would be big....so this cake (without the ball) stands over 6 inches high! 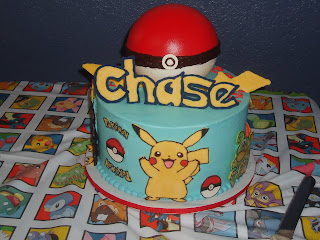 This is the "front" view of the cake. I put Pikachu in front because I think he is the most recognizable Pokemon. He belongs to Ash and everyone knows that Ash is the best trainer!
(I don't really know what I'm talking about, but it sounds good doesn't it?)
Anyway.....the Pokeball on top of the cake is made from chocolate.
I have the Wilton ball pan set and I used it to make a white chocolate half and a red chocolate half.
Then I sealed those together with white chocolate and then I used black chocolate to make the band. (If I would do this cake again....I think I would make black modeling chocolate to make a "cleaner" looking band) then I used a solid melting wafer for the button and drew the circle inside that with an edible marker.
I hope I explained this well enough....I really should take some step by step for cool items like these....action shots!
The name and lightning bolts are made from chocolate. I found a Pokemon font on the internet and used that as a template.
Okay now it's time to play.......Name That Pokemon! 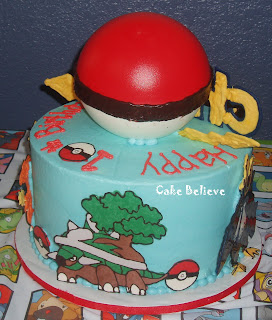 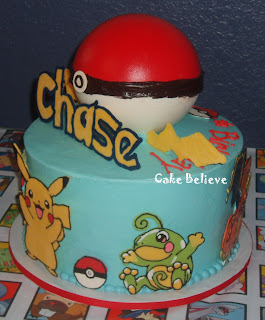 (Politoed) This is my favorite! 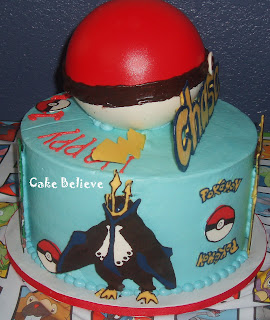 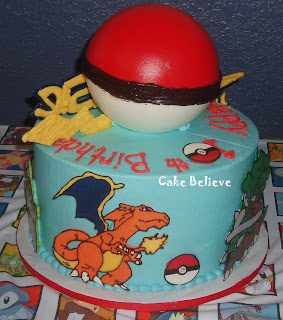 Charizard
As I said before...if you don't know anything about Pokemon you can count your wallet lucky! I know there is some controversy out there among parents about the "morality" of Pokemon (a lot like there is about Harry Potter). But if you've ever seen a Pokemon movie you would find out that it's really about friendship and trusting one another and treating each other with respect. So it's alright in my book~not so much my wallet though. Hee Hee
Posted by Cake Believe at 10:24 AM